Top Seven Made Us Proud At Race Of Champions 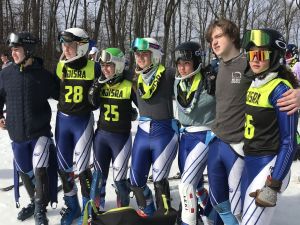 The Race Of Champions (ROC) was held one day earlier at Mountain Creek (South) in Vernon to avoid the inevitable rainy forecast. Although it was a warm, sunny day and the snow was soft, our top seven Sparta alpine racers were all in high spirits as they carved up the race course. The ROC's is a New Jersey Interscholastic Ski Racing Association (NJISRA) individual championship race. Only the top 40% of high school ski racers qualify to race, based on league points accrued during the regular season conference races. Competing in the event for Sparta as All League (Top 33%) were Connor McAndris, Jillian Stote, Olivia Finkeldie, Claudia Calafati and Cora Moriarty.  And competing as Honorable Mention were Tucker Sears and Rachel Young. While most NJ high schools only sent a handful of racers, if any, Sparta was fortunate and had seven top-notch ski racers qualify for the Race of Champions; only Ridgewood and Ridge were represented with more racers. Roughly 40 racers competed in each the boys and girls races. With five of our six varsity girls racing, the Sparta girls ski team were essentially competing in full force.

The first race started with slalom at 10am and the last giant slalom race did not end until late in the afternoon. It was a long and rigorous race day, four races in all (2 slalom races followed by 2 giant slalom races). The Sparta ski team captains led the charts out of the seven Sparta ski racers. Of our five girls racing, Olivia Finkeldie had an outstanding day and finished in 11th place overall, followed by Claudia Calafati taking 22nd place, Jillian Stote 24th place, Cora Moriarty 26th place and Rachel Young 29th place. And for the boys, team captain Connor McAndris sent it and finished in 18th place; Tucker Sears finished in 25th place. All seven Sparta ski racers gave it their all and made us proud to be Spartans!

Congratulations to all of the Athletes who competed in the Race of Champions !!

ROC Weight: 80% of the points earned in the Race Of Champions determines the NJISRA All State team of 12 men and 12 women, who will compete at the upcoming Eastern Regionals in New Hampshire.