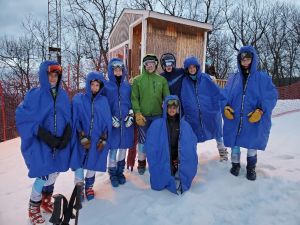 With a can-do attitude "We were served lemons and made lemonade", that's what makes this years ski team so special.

Our final Giant Slalom conference race of the season took place on Friday night. This was the first race the Sparta Ski Team would be competing against all the teams in the opposing conference race, plus our own conference (Vernon & Dwight Englewood). Due to weather, the race had been re-scheduled twice and set to happen on the day of the Sparta High School Snowball Winter Formal, a dinner cruise on the Hudson which half our team was attending. The scheduling conflict posed a major challenge to all the hard work our ski team had put in to this season, negatively affecting our girls standings as well as our racers points to qualify for the Race of Champions. Luckily, two other teams had similar issues and were not present in full force either. This certainly helped to reduce our losses for the race.

While the boys team did not appear to be too affected, they put on a great show and skied into podium 3rd place with a team time of 6:32.43. Vernon finished in first place with a time of 5:50.63 and Don Bosco second place with a time of 6:04.61.  Captain Connor McAndris had a strong night and finished in 5th place overall. The three other Sparta racers contributing to the team time finished one after the other as follows: Charlie Flint 18th place, Colin Kowalski 19th place and Kanna Pasunuri 20th place. The boys ski team will now focus all their attention on picking up a minimum of 3 wins at our final conference slalom race on Tuesday night in order to qualify for State Championships.

Even though our girls team took a hit and fell in the standings with three losses, they only needed one more win to qualify for State Championships. With a skeleton crew of three and one ghost time, the girls varsity ski team managed to finish in 4th place and collect the win. Finishing in first place was Immaculate Heart, followed by Pope John in second and Vernon in third place. Leading the girls varsity ski team with a most outstanding performance was Jillian Stote who sacrificed attending the winter formal and placed 3rd overall. Contributing to the girls team time were Cora Moriarty who finished in 7th place overall and Emma Dyrsten who finished in 13th place overall. All three girls finished among the top 15 for the event and earned NJISRA points.

ONE WIN WAS ALL WE NEEDED
Congratulations Girls Varsity Ski Team you are going to the State Championships !!!

Thanks to everyone who came out to cheer on the Sparta Ski Team. We hope to see you all at our next race, on Tuesday Feb. 11th at 5pm.