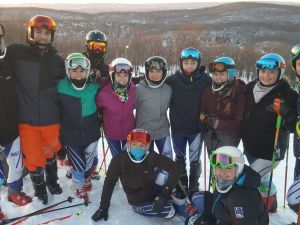 Poised to race against some of the top teams in the state last night, both the boys and girls ski teams raced strong and once again found a place on the podium. Thankfully mother nature was looking out for the Sparta Ski Team, forcing our first slalom race originally scheduled for Jan. 30th to be postponed over a week later. This allowed our ski team extra days in the slalom training course and to acclimate ourselves with racing in the warm weather snow conditions. During this time frame, the varsity ski team also had the opportunity to test their slalom skills and compete head to head in the thrilling Dual Slalom race. With four extra days of slalom practice under our belts, plus the dual slalom race, our skiers were no longer concerned with the heavy snow conditions and potential for deep ruts.They remained focused on the gates ahead of them and skied with confidence to the finish.

All six Sparta JV Boys finished in the top seven, leading the charts were Jake Scott in 1st place, Jack Maraziti in second and Colin Kowalski in third overall. For the Sparta JV Girls team, Cora Moriarty finished in 2nd place overall among the sea of Ridgewood racers.

Our next Slalom Race is Monday Feb. 11th at 5pm